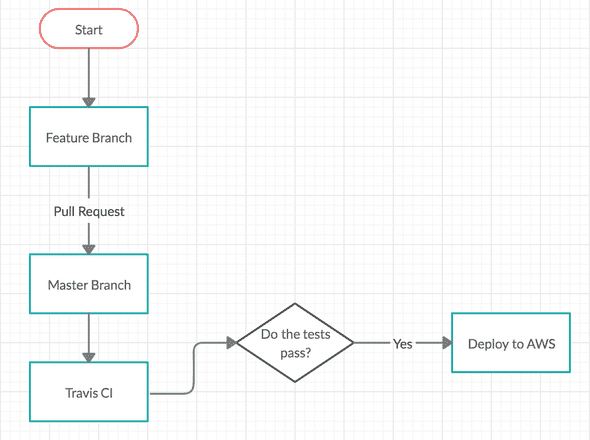 The tools/services that we will use are:

Create react app has 3 main commands, each for one of our 3 enviroments.

First we will dockerize our application for the development enviroment. Let’s create a dockerfile for our it and name it Dockerfile.dev. We use the node:alpine image as base, setting up a working directory, copy the files from the host machine and start the development server.

We can run the container using the id that is generated by the docker build. We need to specify the ports that we want to be exposed so we can access the app from our host machine. Something like:

With the COPY command in our dockerfile, we essentially did the following:

The problem with this is that if we make any change to our application on the host, our container do not have the changes, so we can’t see them. We would have to re-build the image, which obviously it is not ideal since it can be time-consuming. To fix that we can make use of Docker Volumes.

With Docker Volumes what we do is to set a referrence to the folders in the host machine.

To do that we can run:

Let’s explain a bit that part of the command

It basically says “Whenever you want to use something on the app folder in the container, look in the host machine working directory except the node_modules folder”

The reason of excluding the node_modules is because we may wanna delete the ones from the host machine since the are not really needed, and by not specifying a : there we basically say to docker use the ones from the container, so all the npm commands will still be working.

Of-course having to write this long commands is not ideal. We can create a docker-compose file that will mimic the previous commands.

We can create a new container to run our tests

As we said to run the tests create-react-app specifies a npm script, npm run test, so we can do:

docker exec is helping to interact with a running container.

This temporary solution is working fine, but is not suitable when we want to build a CI/CD flow because in reality we are peeking inside another service to run our tests.

So it will be better to create a service just for running our tests:

For production we can’t use the development server that create-react-app provides as it is not optimised for that, also we want our assets to be minified etc, for that we need to run npm run build to get a build folder with all the assets that we need, and then use a better server more suitable for production. I chose nginx.

We will create a new Dockerfile (without the .dev suffix) and setup a 2 step process. The first step will build our app, and is the one that is very similar with our existing Dockerfile (having node:alpine as base image), the second step will take the outcome of the 1st, use nginx image and run it.

nginx is serving static content from the /usr/share/nginx/html directory, so we copied the output of the build process to that directory. We don’t need to specify any command to start the nginx, because the default command of the image will already do that. nginx is serving the content on the port 80 so we can see if everything works fine by running

Then we can open our browser and navigate to localhost:8080.

In the next part of the tutorial we will build our CI/CD pipeline to move our dockerized app to production.